Arrows in the Quiver Gallery

After studying art through High School, Doug went on to college where he applied his passion for art & architecture culminating in graduation in 1971 in Architectural Technology.  For the next 30 years he enjoyed a successful business career in the Hamilton, Ontario area until early retirement in 2002.  Throughout his business career he had the good fortune to study with several well-known Canadian and American watercolourists, which laid the groundwork for his second and current career as a watercolour artist and instructor.

Doug's painting approach is uniquely ‘loose and impressionistic’ and he readily admits being influenced early on by the colour and compositions of John Singer Sargent and the design philosophy of Edgar Whitney.  Today he follows a Whitney-like instructional style for his workshops with proven results.  His daily demonstrations, lessons and critiques utilize the Design Elements and the Principles of Design, all of which form the basis for his workshops.

Doug is an elected member of the prestigious - Canadian Society of Painters in Water Colour (CSPWC) and he is Past-President of the Central Ontario Art Association (COAA).  His enthusiasm for the watercolour medium along with his pragmatic and light-hearted approach, all lead to a stress-free and enjoyable experience.

With ‘Spontaneity’ being the hallmark of Doug’s watercolour workshops, he finds his distinctive coaching style sends people home at the end of the day - ‘tired but inspired’.

This award winning artist has established himself as a popular and much sought after watercolour artist and instructor and the following testimonials are indicative of the quality of his watercolour workshops: 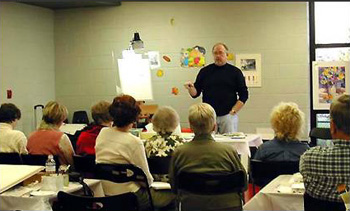 "After meeting Doug in August, 2002 and being totally inspired by his loose, fresh watercolours, I was anxious to sign up for his classes"

"He is both an accomplished watercolourist and a personable & effective instructor.  I look forward to taking future classes with Doug"